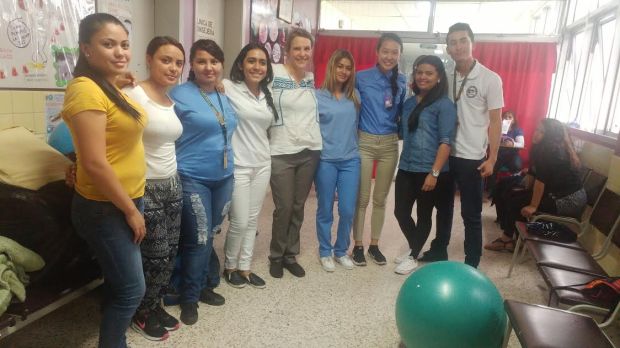 It is the beginning of my third week with Dar a Luz Honduras and the rainy season has officially begun. I have started work in a another hospital in the capital and will be attending one of the workshops that Silvia teaches there later this week. This one in particular will be a workshop on teenage pregnancy.

Over the past couple months, Dar a Luz Honduras has been progressed in several different projects. As mentioned in a previous post, Silvia has been working on an eductaional video for Respectful Maternity Care and Human Rights in Childbirth with the approval of the Health Department of Honduras and has now begun the editing process with the studio. They are also nearing the final review of educational material (such as brochures and posters), to be distributed throughout all the labor and delivery wards of Honduras for expectant mothers and healthcare personnel.

Furthermore, due to the efforts of Dar a Luz, the curriculum for sixth year medical students now includes a seminar that covers respectful maternity care, human rights during childbirth, and obstetric violence, which is taught by Silvia and gynecologists currently in the field. This has increased awareness and helped to change some of the common practices seen in the hospitals. For example, there is a reduced Kristeller rate in Tegucigalpa and in some shifts, expectant mothers are now allowed to drink water during labor.

A few weeks ago, Dar a Luz Honduras also made a trip to one of the mountain village’s health centers to visit the midwife group started by Dar a Luz. The meeting was to review one of the chapters from the Hesperian Foundation’s Book for Midwives for a new edition and also to catch up with the midwives and see how their work was going. Dar a Luz also brought the midwives some materials they needed and donated supplies to the healthcare center.

During the trip, they also brought shoes to protect children in need from contracting diseases and parasites that could be transmitted through feet.

Dar a Luz also donated supplies like pens and notebooks to a small school located off of one of the mountain trails. Maria, an old friend of Silvia’s, delivered the shoes, a bag of clothes, and other supplies to the children. She currently works at the school after having encountered many 12 year old kids who were unable to read or write and dedicated herself to teaching them.

Overall, it has been an amazing couple weeks and I have had the opportunity to learn so much about different birthing experiences, Honduras, and myself. I will be very sad to leave in a week, but know that incredible things are happening here.

Help us raise funds so we can continue improving maternal and newborn health in Honduras.

Thank you for your interest in Dar a Luz Honduras. We would love to hear from you! <GRACIAS POR SU INTERES EN DAR A LUZ HONDURAS. NOS ENCANTARÍA ESCUCHAR DE USTED!