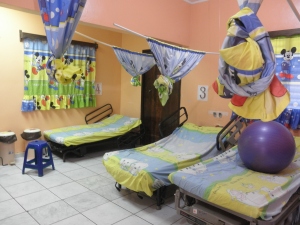 I arrived in Honduras in January, spending my first month based out of Copan Ruinas. There I lived with a wonderful family while trying to balance my work with the Spanish classes Silvia organized for me. Every day I would take a collectivo to the Materno-Infantil Clinica in nearby El Jarral for work. In Copan, women with the means to do so secure transportation to the larger hospitals of Santa Rosa or nearby Guatemala or occasionally have a private doctor. The vast majority of the women who come into this clinic are from impoverished villages in the mountains. A few weeks before their due date, they can arrive to stay in an adjacent dorm, the Hogar Materno. By Central American standards, the women in the clinic are allowed quite a bit of freedom. While they must labor alone, they are at least permitted to get out of bed and move freely. By and large the staff at the clinic is warm and friendly; and because only three to five women give birth there a day, they generally receive attentive care. Since the clinic is small and has limited resources, women by and large escape the perilous over medicalization of  birth that would befall them in larger, urban hospitals. However, should a major intervention be truly necessary, she is a three hour ambulance ride away from help. Among the women I worked with, malnutrition is widespread. Most meals consist of simply beans and

tortillas, but the beans can be a luxury, and it is common for a meal to consist only of a tortilla with salt. Very young mothers (I worked with girls as young as 13) and women with over six children are common and pose increased risks for complications as well. I hope that in my time in Copan, I was able to further familiarize the staff with comfort measures so that they will independently encourage their use in the future after my time here is done. It is also my hope that in modeling compassionate support and proving its positive outcomes, the well intentioned but skewed power dynamic existing between the women and staff in the future may be softened.

When a woman was admitted into the clinic, we would talk a bit about how she was feeling, if she had other children, and try to establish a connection. Simply smiling and being positive was usually all it took to bridge the gap. I rarely knew how dilated she was and had no access to her paperwork, but this really forced me to be perceptive to the cues she was giving me, and to take things as they came as opposed to focusing on numbers or percentages as caregivers often do. Sometimes I would work with a woman who had had eight children at home without a midwife present, totally alone; and my role would be simply to close the curtains for her, encourage quiet, and create a sense of privacy. With other women I would find myself in a more active role, using comfort measures and a birth ball, which was donated by Dar a Luz last year and proved a great resource. For a volunteer with conversational Spanish, there are also lots of opportunities to work in the health care center, with local midwives, or do education work with the women in the Hogar.

One day stands out in my mind as particularly special from my time in Copan. Two first time mothers were in labor at the same time, but since their beds were right next to each other I was able to divide my time easily among them at first. However, soon it became obvious that one woman, Sandra, really needed much more active support. She was crying and feeling very scared, staying very tense and restless. I made sure the other mother, Maribel, was comfortable, swaying on the birth ball and having found a nice rhythm, then went to help Sandra. Together she was able to calm down, and we sat very close breathing together. Soon after, Maribel peeked her head in, and asked if she could join us. She wanted to help Sandra, and also wanted to be connected to us instead of alone. Sandra said yes, of course, and the three of us sat on the beds holding hands and breathing together. It was so powerful!

I truly enjoyed my time in El Jaral, and it is a real testament to the women who work in the clinic that I should be able to say that! Now I will spend my next few months in the much larger urban hospital of La Ceiba, where on average eighteen women give birth a day and restrictions much more strict. It will be interesting to contrast my experiences in such a different environment. I am so thankful for this time working with Dar a Luz!

Help us raise funds so we can continue improving maternal and newborn health in Honduras.

Thank you for your interest in Dar a Luz Honduras. We would love to hear from you! <GRACIAS POR SU INTERES EN DAR A LUZ HONDURAS. NOS ENCANTARÍA ESCUCHAR DE USTED!